Compared with the under-the-radar New Forest Marathon, Yorkshire has been my focus since I crapped out on the North Downs; being the last road marathon of the year, it was my last chance to consolidate a sub-4 (or ideally, a sub-3:45) time in 2015. In fact, it’s been in my diary longer than most other races, have been booked back in January. A fact which I only understood the significance of when I went to find my starting pen, then remembered that my expected finish time back in January was a lot more conservative than it is now. Note to self: next time, punch just a little bit above your weight. 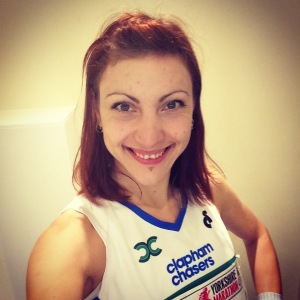 Somehow I’ve avoided serious injury so far this year (touch wood, touch ALL the wood) and managed to strike the balance between keeping up my daily run streak while varying the effort, as a concession to my body’s need for rest. It is beginning to fall apart at the seams though, I can feel it. Like a well loved teddy bear, the stuffing is beginning to sprout from the joints, the covering is threadbare, the once sturdy posture is stooped and folded. I am cajoling it towards the finish line on 1st January 2016, when I will have run at least 1 mile per day for 365 consecutive days and at least 1 marathon per calendar month – or at least, that’s the plan. Between my body and the finish line stands the three-day Druid’s Challenge and the CTS Ultra in Dorset. I’m going to need extra stitches to keep all that stuffing in.

Then again, in many ways I was looking at Yorkshire in the same light as I saw Manchester back in April – again I would be toeing the start line less than fully rested, again I could be looking at anything between a PB and a bang average time, again I would be relying on northern hubris to give me a boost without succumbing to crowd-phobia along the way. I had a restlessly excited night’s sleep fuelled by more red wine, tiramisu and pasta than is really sensible for one person to consume, and set out the next morning while the sky was still gunmetal grey. 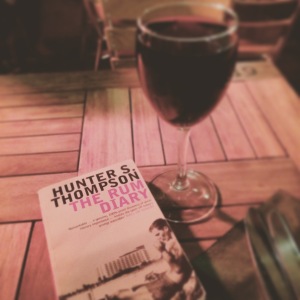 It was nice to be able to stretch my legs on the half hour walk from city centre hotel to race village, set in the impressive and picturesque University of York campus. The registration, baggage drop and starting pens were at far ends from each other necessitating a good old trek from one to the next, but since I made sure I was there nearly two hours early I could stroll about at leisure, taking photos of ducks and exploring the many bridges and waterways on site. It was an inspiring venue for a marathon start and must be a wonderful environment to study in. 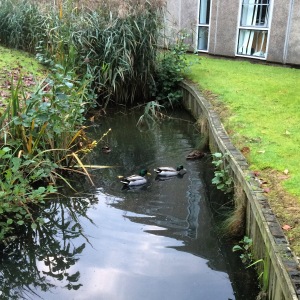 When I had done all the procrastinating, Instagramming and Twittering I could reasonably do, I handed in my bag and walked back up to the starting pens along University Road. As they slowly filled I kept an eye out for the pacers and their flags, looking for 3:45; the pens looked to have been in order of expected finish time, but weren’t marked with anything other than a pen number. I saw the 4:00 pacer tuck into the back of the pen I had been assigned to, then realised my mistake – of course I hadn’t thought I’d be doing this kind of time when I booked up at the beginning of the year, so 3:45 was way ahead of me, about halfway up the pen in front. There was no possibility of jumping pens that I could see, with marshals posted at each one and staggered start times between them, so I shuffled to the very front of mine and hoped that I could make my way forward when the race started. Because everyone knows the best way to start a marathon is by sprinting.

I don’t know what possessed me to obsess over following a pacer when I have £200’s worth of GPS watch AND a pacing band on my wrist – especially when following a pacer only really works if you start at the same time – but obsess I did, using the first mile to carve my way through the field in pursuit of the bobbing flag. And so I missed pretty much the only stretch of the race with views worth looking out for; York Minster, the walls of the city, the winding river and friendly throng all melted by as I puffed and panted my way through the first couple of miles four minutes too fast for the ideal pace. On the plus side, my hot start went towards me breaking my 10k record. Never say I don’t do things by halves. 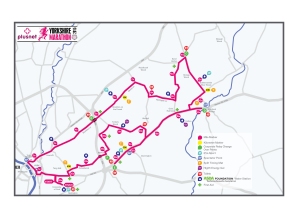 Having circled the city, the course took us on a dead straight line due north east, up Stockton Lane towards a right hand turn at the 7m point. Leaving York Minster behind meant that the rest of the route would be pretty much A-roads and country lanes, with regular as clockwork water stations every three miles. Good old Yorkshire obliged with perfect weather – clear and crisp to begin with, making way for sunshine later in the day. I was still feeling strong as I passed both the 10k and 20k timing mats, but I’ve got to know my body well over the last couple of years and I knew that my over-exuberance in the first half would come back to bite me. Holding on to a comfortable rhythm for as long as possible I allowed my average pace to slide gradually, first past 8:00, then 8:15, drifting second by second towards the eight and a half minute per mile marker that I would need to hit to get under 3:45 once more.

As predicted, the first I felt of a leaden drag in my feet was around halfway as we made the first of two switchbacks at Stamford Bridge. I allowed my pace to slacken slightly, hoping to recoup some of the energy I’d expended at the beginning and went for another salted caramel Gu to give me that extra oomph. As well as water every third mile there were also iPro energy drinks on offer at miles 6, 12 and 18 but having not been able to find that brand to try it out beforehand I didn’t want to risk drinking any in case it turned me into a pumpkin or something. Since then I’ve seen the bloody stuff advertised everywhere, obviously. Such is the law of sod.

By around mile 18 I knew I would have to let 3:45 go and try for sub 4 instead, and as soon as I made that decision I crashed headlong into The Wall. Hips seized up, legs rooted themselves to the ground, stomach started simultaneously refusing any input and grumbling loudly enough for the wildlife to hear. Facing that old familiar demon – whether to eat and risk throwing up or not eat and pass out – I flashed back to the North Downs and decided it was time to grow the hell up and force down another gel. If it didn’t actually make me go faster, it certainly seemed to stem the hunger pangs and nausea. I could have really done with a bit of Kendal mint cake to be honest. Or for that matter, a pie and a pint. I would finish the race, but I’d be walking more than running from here on in.

The support was lovely and encouraging when it appeared, but the crowds were few and far between, and for the first time I found myself wishing there was more people about. I was vaguely aware of Andy tracking me on the app, thinking that he would have seen my optimistic 10k and 20k splits and must have been wondering what the hell happened. In the hope of a boost I shuffled through playlists trying to find something cheerful, but the running playlist seemed to be mocking me and my old skool 90s dance album sounded a bit like a tryhard at a party, throwing their arms around and forcing everyone to have fun. And it really wasn’t the day for Haruki Murakami.

My slowest mile was the run up to the 24 marker at Osbaldwick, but I managed to pick up for the last couple of miles and was back up and running (sort of) as we made our way towards the 40k mat. By now there were more crowds, singing and music and barbecues and children holding out their hands for a high five; I’d lost my sense of humour a long way back, but at least I knew now that the sooner I got a move on the sooner I’d see University Road and the finish line again. I just wanted it to be over and done with.

It was’t a triumphant finish, or an enjoyable one, but when I crossed the line well inside the four hour mark I realised what a petulant dick I’d been. Any finish is a finish to celebrate, and I had to remember how privileged I am to be able to run at all. The good people of Yorkshire soon sorted out my sulk though, and I was quietly thankful to be walking all the way across the campus once more. So many happy and proud faces around me, glowing in the autumn sun, brandishing medals and finishers’ t-shirts and swapping stories. With a couple of hours before my train home was due, I stretched out on the grass for a while to let the atmosphere sink in. The bank was covered with people sprawled out like the fallout of a runner hand grenade, two little boys dancing between them and spraying crisps and juice everywhere. It was hard to stay grumpy for long. 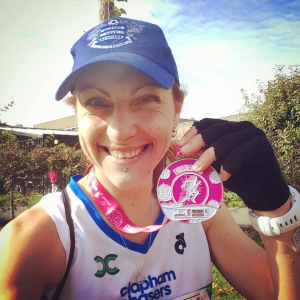 I’m happy to be done with road marathons for the meantime; even as I write this I’m watching the Channel 4 broadcast of the race highlights and feeling the itch, but I know the itch will still be there in April and I’ll be in much better shape for having taken a break from the tarmac. As I watch there’s a touch of jealousy for all those past versions of runners, myself included, starting the race once more as if given a second chance to do it. Maybe this time I won’t race off at the start and wear myself out? Oh no, it doesn’t work like that.

So what have I learned? When you get that chance, treat it with respect. Trust your training, trust your body, trust the stupidly expensive watch you bought so you wouldn’t NEED a pacer. Most of all, trust yourself. You know what you’re doing.

With Druids and CTS Dorset still to come though, do I?