Every now and again I look back over my old posts and see if, with the benefit of hindsight, I spot any patterns or consequences that I hadn’t noticed at the time. Probably I account for half of my own hits doing this, but there you go.

In 2015 I ran every day of the year and also covered 16 marathons, finishing at least one every calendar month. It was my best running year in almost every respect. I got PBs in pretty much every distance which stand to this day, ran the highest number of miles with the least amount of injury or illness – seriously, I didn’t get a single cold that year – enjoyed the fastest recovery times I’ve ever had, and above all had the most fun. I didn’t think there was any discipline involved, really. And the only “plan” I had was to keep up the streak and keep enjoying myself.

A change in professional circumstances meant that I reluctantly quit the daily run streak, especially as it was getting harder and harder to fit it in. Within a couple of months a daily run streak had dwindled to barely three times a week to injury knocking me out for weeks at a time. My running career got 2016’d, in short. I’ve reflected on this many times to work out what went wrong, exactly. Was it quitting the run streak? Do I need to run a little bit every day just to keep up my fitness, not to mention my motivation? Was it coincidence; did I just happen to get injured after I quit the streak? Was it the delayed effects of a streak catching up with me six weeks later? I definitely didn’t want to believe that last one but I eventually devoted some time to finding precedents for this situation, and happily found none. In fact I found plenty of reports of run streakers out-running injury and illness for years. But could that simply have been confirmation bias?

So I tried to analyse each elements that changed for me at the turn of the year and work out which one was the culprit.

Work-life balance: New job, more erratic hours, more stressful and less time to run and alleviate that stress. Yes, definitely sounds like a prime suspect. There’s just something that niggles about this hypothesis though; increased stress can absolutely be to blame for illness and there’s no doubt that the injury started a downward spiral of “I’m injured so I can’t run, I can’t run so I’m miserable, I’m miserable so I overeat, now I’m too heavy to run…” But can being more stressed at work really have a direct link to the injury? I mean it was only a wee one; bog standard runner’s knee, sorted within a month and even then only because I was too stubborn to rest it. I can believe that there’s a chain reaction, but I think there’s a chain link missing.

Lack of fitness: Definitely another possibility. But you don’t lose fitness just like that; not in the timescale we’re talking. I didn’t lose a damn leg. And although it felt at the time like I was never going to run again, I was still managing a couple of easy runs a week and spent no more than a fortnight without running at all. Proportionally to my expectations of myself I wasn’t doing well, but I imagine that’s what most runners call their off-season. It should have been possible for me to regain it.

Lack of motivation: Honestly? Nope. I mean there were days I felt like being lazy or avoided a session and felt guilty about it afterwards, but I still missed running, I just couldn’t do as much as I wanted. I was miserable, but not unmotivated.

Overtraining: Yes, that was a thing. That was definitely a thing – in 2017. I’m talking about a year before. It could well be the root of the issues I had later, in that I pushed myself too hard to make up for missed runs, but when I quit the run streak I didn’t feel the slightest hint of what I now know to be classic OTS symptoms. I didn’t quit because I was exhausted, I quit because I thought I should while I was ahead.

And finally, the fringiest and most superstitious of reasons, 2016: Because everything that was cool died in 2016. I’m not seriously considering this as a genuine cause, but I’m leaving it there anyway because fuck 2016.

I’ve written about all these hypotheses at one point or another, but none of them have ticked all the boxes for me, none of them present as a wholly satisfactory explanation for my loss of form. And then I read a reply to a Facebook post on the Ultrarunning Community asking how long the longest run should be in preparation for a 100 mile race. The reply was written by Tracey Watson, as far as I know the only person to have done the Centurion Double Grand Slam in two consecutive years – or at all – which means officially finishing four 100 mile races and four 50 mile races in a single year, between April and November. Now if she’s not qualified to answer this question, who is?

Her answer? She never does longer than 30 miles on a training run, not even for the 100s; the 50 milers pretty much act as training for those anyway. The key to training, she said, was consistency.

That very obvious and often-cited piece of advice made something suddenly click for me. Not that I hadn’t heard it before, but I hadn’t really made the connection. The missing link in the chain, the one thing that could explain the difference between 2015 and 2016, that even contributed to the later onset of OTS, was consistency.

I looked again at 2015. Instead of seeing my daily run as a benefit in and of itself, perhaps I was actually reaping the benefit of consistent training. The other major feature of that year was that I had relatively standard working hours and trained in pretty much the same pattern across each week, with a marathon every fourth week on average. Apart from a notable exception, each month’s running total was only around 10% more or less than the average, which includes the numbers skewed by Druids and a failed attempt at the NDW100. For the first time it occurred to me that the routine, rather than the volume, could have been the key.

Then I looked at the start of 2016. That’s not just when I quit the streak and therefore the training pattern I had been used to. Work-wise, that’s also when my hours went completely topsy turvy and when I started having to miss or rearrange races. Then I started missing sessions, and trying to make up for them by going harder and longer when the opportunity arose, not knowing when I’d get the next chance. Unsurprisingly, by February I was nursing a classic runner’s knee, and in April I was forcing myself around the London Marathon course at an effort that oscillated between suicide and sloth. After that, I didn’t finish another race until the end of August. I didn’t just lose consistency, I forgot what it meant altogether.

Between then and Wendover Woods this past November my fitness slipped gradually away and I couldn’t work out why. It felt like I was trying to hold onto sand as it passed between my fingers; I’d grasp and stretch my hands out to catch as much as possible and simply lose it all the faster. Understanding the importance of consistency felt like remembering I needed to cup my hands together. So I turned to something that hasn’t really worked for me before, but might just be able to re-establish a routine. I picked up a training plan.

I’ve never got on with them in the past either because I’d not found a plan that suited my preferred effort-based philosophy, or because I’m simply not disciplined enough to follow a plan. I much prefer the “see how you feel” approach and it doesn’t tend to let me down because I never see running as a chore, as something I have to do because the plan says so. However, the P&D plan I’d tried once before, only to discover that I had started it way too late, seemed worth a try even if I had to adjust it a bit. Each day’s session is much the same as the previous week’s, with either the addition of effort or a mile or so in distance. 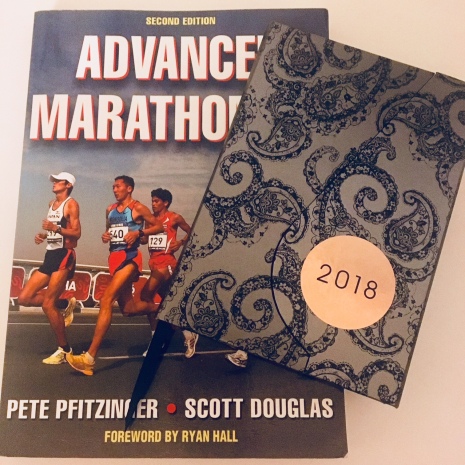 Six weeks in and already my body has got used to resting on a Monday – usually the day after a long run and a day which fits my work schedule – then doing 9 or 10 miles aerobic pace on a Tuesday (i.e. run home from work), recovery or rest on Wednesday and Friday, tempo on Thursday, hard effort parkrun on Saturday (OK I do bend the rules there) and a long run on Sunday. The fact that I can remember this without looking at the plan tells me that the consistency is working. Or to put it another way, the routine. I’m in the next phase now which means upping the effort levels and the distances a bit, but I’m building on solid foundations. At least, that’s the theory.

The thing is I’m still much much slower (and heavier) than I was three years ago, but I’m feeling more in control than I have for a long time, which means I’m enjoying myself more. All because of the comfort of knowing what my week looks like. And I won’t hit all the targets of the plan itself bang on, but you know what? That’s fine. I’m still moving in the right direction, at a steady pace, nice and consistent. If that’s the best I can hope for, it’s enough.

The last couple of years have been tough, but I don’t think I’d have made this connection and started to fix my approach if I hadn’t hit rock bottom. For my signoff today, I’m going to hand over to Truth Potato: