In my quest to run at least one marathon every month this year, March (not traditionally a marathon rich month) threw up only a few options that appealed to me. Some were too far away, some clashed with other events, but one stood out; being on a rare free Sunday, set in one of my favourite parts of southern Britain, promising a view of some real live peacocks and run by the same organisers who do the legendary Giants Head Marathon. And when the email came through with the race instructions for the Larmer Tree Marathon, I knew I’d chosen wisely.

Never before have instructions made me laugh so hard that I sprayed my PC screen with coffee. Under Weather was the comment “We won’t be cancelling the race if there’s inclement weather. We will be sitting in the warm by a fully stocked bar.” Under FAQs: “Q: Is there a Costa Coffee or a Starbucks nearby? A: No, this is the countryside.” “Q: Do I have to enjoy myself? A: Yes, it’s the law.” And my personal favourite, “Q: What time does the bar shut? A: When we all go home.” A race with its own bar. White Star Running sound like my kind of people.

After various last minute dropouts, team Clapham Chasers consisted of me and Robert H taking rooms at an inn a few miles away from the race HQ in Larmer Tree Gardens, and Karina and Rob staying with family nearby. Poor Robert had not only been kind enough to wait until late afternoon on the Saturday so I could make 75 minutes of Crystal Palace v QPR before driving down to Wiltshire – what a waste of 75 minutes that was – but he also had to hang around for me after the race as I was the only Chaser mad enough to do the full marathon distance, with the other three sensibly plumping for the half. I made it up to him by forcing him to do a cheesy grin photo by the Start/Finish line. Pretty sure that helped.

All three courses – full marathon, half and 20 miles – plotted a route around the beautiful Rushmore Estate, and as race director Andy proudly announced at the briefing, the starting line straddles the counties of Wiltshire and Dorset. We picked up our numbers from the main café in the centre of Larmer Tree Gardens, where there was also a stall selling fresh pastries, tea and coffee and another for merchandise. The same room would be converted into a food court later on with lasagne, macaroni cheese, burgers, pizza, salad and all kinds of hot food being served. I was looking forward to seeing that room almost as much as I was the peacocks.

We started off by following a path around the grounds that led us downhill and across a road towards the main trail. I settled into a nice easy rhythm early on, enjoying the slope and using it to find myself a good position in the throng of runners. This is fun, I thought. What a nice way to start a marathon, I thought. Then I heard a lady nearby say “I’m not looking forward to coming up this hill at the end,” and the penny dropped. The finish line is the reverse of the start, which meant we would be finishing on an uphill climb. Ah well. Worry about that in 26 miles’ time.

With my partner Andy’s parents living in Salisbury we find ourselves in and around Wiltshire quite a lot, and I have a great affinity with the area. Whether it’s the pagan influence, the beautiful countryside or just the fact that I’m either running or eating good food whenever I’m there, I always feel right at home. This race was no different; I had a dopey grin on my face most of the time. Added to this, the ground conditions were perfect – a nice mixture of cushioning on top and firm ground underneath, with neither boggy mud nor slippery chalk to contend with – and the weather held out with a cool calm air temperature and no wind or rain to speak of. As one would expect in such a mystical area, it was as though all the planets has aligned. I settled into a rhythm and zoned out.

At the beginning of the race, not really knowing what to expect but sticking with my trusty walk up/run down tactic for hills, I had estimated around a five hour finishing time. I didn’t care particularly, to be honest; still winding down from a busy winter and preparing for the North Downs 100, I just wanted to get some steady miles under my belt. As usual though, when I’m not stressing about my time I seem to fly. At the halfway point I was just within two and a quarter hours, and still feeling pretty strong. I had no idea what terrain was ahead of me though – other than the climb at the end – and couldn’t be sure that the second half wasn’t all uphill or through bog or under water or something ridiculous. So I put all thoughts of a four and a half hour finish out of mind and listened to my audiobook. Stephen Fry, reading one of his own novels. I’ve never felt so English in all my life.

There are a generous number of water and aid stations along the route, but the most important one is the Lovestation at mile 20. I came tearing down another gentle incline to find a marquee sheltering two trestles full of home baked food, a couple of chairs for runners to pause and rest, and a man in a kilt – Uncle Kev, apparently – waiting at the bottom to catch all the runners and give them a big sporrony hug. I think I was laughing too hard to answer when he asked me how I was doing, and he nearly didn’t let me carry on. Uncle Kev’s role is more than mirth and mischief; the point of the Lovestation is to do a health check on the runners as they come through and make sure no-one is suffering too badly to continue. And, you know, hugs.

Whether it was the hug or the whole bag of jelly snakes I’d eaten, or whether I’d just managed to pace myself properly for a change, I left the Lovestation feeling stronger than ever; just in time to hit Tollard Park and Tollard Green, the boggiest and most uneven stretch of the whole course. It’s a bit cruel plotting such tricky terrain in the last five miles of a marathon, but all those miles along the North Downs finally paid off and me and my gorgeous Salomon Fellraisers fairly danced through it. I felt effortless, my pace quick and my feet light, and I must have overtaken a good twenty people in the final 5k. All that hippy one-with-nature tranquillity went right out of the window. The audiobook was swapped for Gold Dust. Game face. 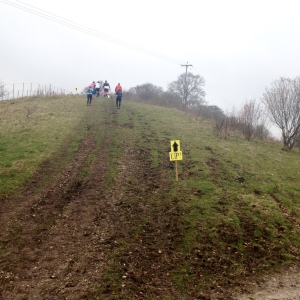 As we crossed the road and reached the hill up to Larmer Tree Gardens at the end, I dug in for the climb. It was longer than I remembered from the start, and I paced myself by chanting “don’t go faster, slow down less, don’t go faster, slow down less,” all the way to the top. I turned onto the final straight, seeing the clock pass four hours and thirty minutes but knowing I’d been at the back of the pack and would still just be on for sub 4:30. I hadn’t cared about times at all until I crossed that road, but as soon as I saw the clock I couldn’t resist. A sprint finish, and I just about made it.

I wobbled into the café to find Robert, who hadn’t been expecting me for another half an hour, and claimed a steaming hot plate of mac and cheese. I was just in time for the awards too, and to pick up prizes for Karina and Rob who had both placed second in the half marathon. And just as I packed up my things to hobble back to the car, I remembered one last very important errand. He refused to do his tail display despite my pleading, but I did at least manage to get a photo of him strutting around, being ostentatiously disinterested.

Robert and I talked a lot about running on the journey back – surprise surprise – and it was fascinating to hear about his career and how the standards have changed so much over the years. He told me that he was plum last in his first marathon, and his time that day still beat mine at the Larmer Tree by over half an hour. I know I’m never going to be a fast runner, but being so much more confident over rough terrain now my trail marathon times are fast catching up with my road times, even though I’m not speeding up overall. It really helps being around such quality runners in the Chasers, even though it can be a bit intimidating at times, because you can’t help but be carried along. More and more I appreciate the importance of being part of such a fabulous a running club, to share my highs and support me in my lows, and to know there’s always someone willing to offer advice or a lift or a hug. Sporron optional.