It’s that time of year, if you were one of the people who applied for a London Marathon ballot place back in April, when you find out if your 12 to 1 shot was successful. Which means odds are you got home this week to find a copy of Marathon News with “Sorry!” splashed cheerfully across the front cover. 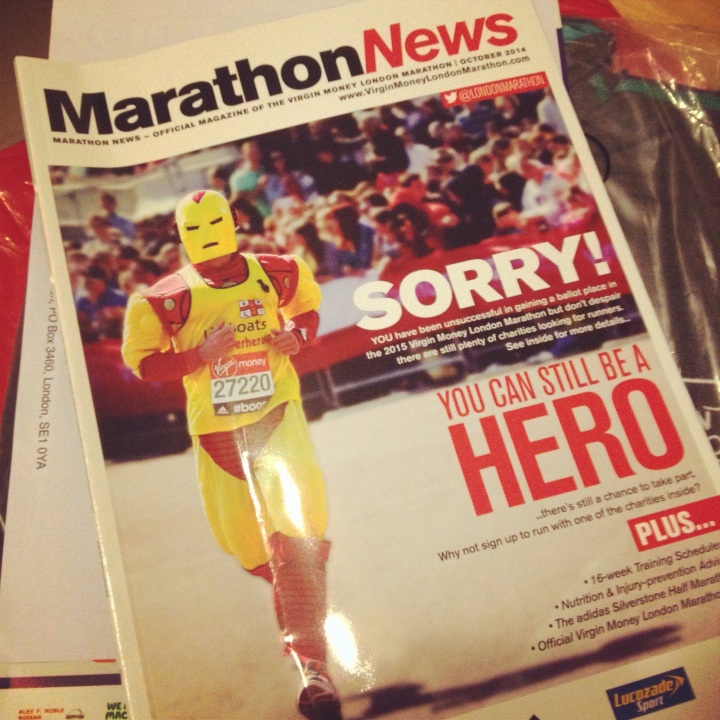 You might have had a particularly stressful couple of weeks: an overwhelming workload or bad news from your family or disquiet in your social group or another abject loss for your football team. You might have run home from work that day, hoping to shake out your worries, been just about approaching normality again, then seen the parcel on your doormat and your heart might have sunk once again. Maybe that’s just me.

Alright; I am overdramatising the situation somewhat. Not getting into London for the third time in a row is a bit disappointing, but if I’m going to hang my chances of happiness on something, a 12 to 1 shot is a poor choice. In any case I have my health, and plenty more going for me besides.

Compare that with the thousands of families affected by cancer or heart disease; or the children born deaf or blind or both; or those afflicted both by mental illness and the stigma attached to it; and my disappointment at not getting through a marathon ballot is pretty pitiful. That said, I could do something about my disappointment AND help the less fortunate by taking up a charity place. Or could I?

My reasons for wanting to run the London Marathon – and I only really want to run it once – are entirely personal: because it’s my hometown event and because it’s an experience like no other. I want to tick off another classic race on my list, not to test myself or to break a new boundary. But if my only chance of doing it is by asking my friends for sponsorship again then I’m effectively asking them to subsidise my hobby. I don’t feel right about doing that.

Many of the charities offering places for 2015 require a minimum donation target of £1800-£2000 per person. This is for very good reason – the event represents a huge opportunity for income (not to mention publicity) for these charities, and the London Marathon has a strong tradition of fundraising, fundamental to the ethos of the event ever since its inception in 1981. Not everyone can finish a marathon, and let’s be honest, sponsorship isn’t just for the 26.2 miles at the end but the 6 months of training leading up to it. It’s a no brainer really.

But – and I’m going to sound awfully arrogant here – what if finishing a marathon isn’t that much of a challenge to you? Obviously it’s a challenge to any human being, but surely more so to a first timer or someone not obviously athletic than to a regular long distance runner. It can of course be a challenge for other reasons; more and more now we see people running dressed in outrageous and bulky outfits, or while knitting at the same time, or carrying an actual fridge on their backs. But if I just want to run a marathon, is London the event for me?

My first marathon, as I’ve mentioned here before, was Edinburgh in 2013. I had set myself a challenge to raise money for a charity – specifically, Macmillan – to repay the wonderful work they did caring for a friend of mine who had died of cancer a few years before. Mum and I had applied to the ballot for London and failed, were afraid of not being able to reach £4000 in sponsorship between us, and so decided to do Edinburgh instead. Even though our minimum target was a much more achievable £750 each, we got pretty close to the £4k between us anyway. It was easy because I was passionate about the cause, and because I was passionate about the cause I could drag myself out of bed and onto dark streets to train even when I wanted to be curled up in bed with a packet of ginger nuts.

The next year we failed to get into London again, so we signed up for Brighton which runs the week before. This time I was raising money for the other charity who had nursed my friend through his final months, CLIC Sargent. I felt as strongly about this cause as I had Macmillan and I had always intended to do two marathons so both charities would benefit, but this time I struggled even to make my £400 minimum. Was it because it was so close to London, and everyone who was going to sponsor someone had given all their money to the higher profile challenge? Was it because I was running alone this time with mum pulling out injured, and missing out on support from her friends and family? Or was it simply harder to persuade people to sponsor me to do something they already knew I could do? 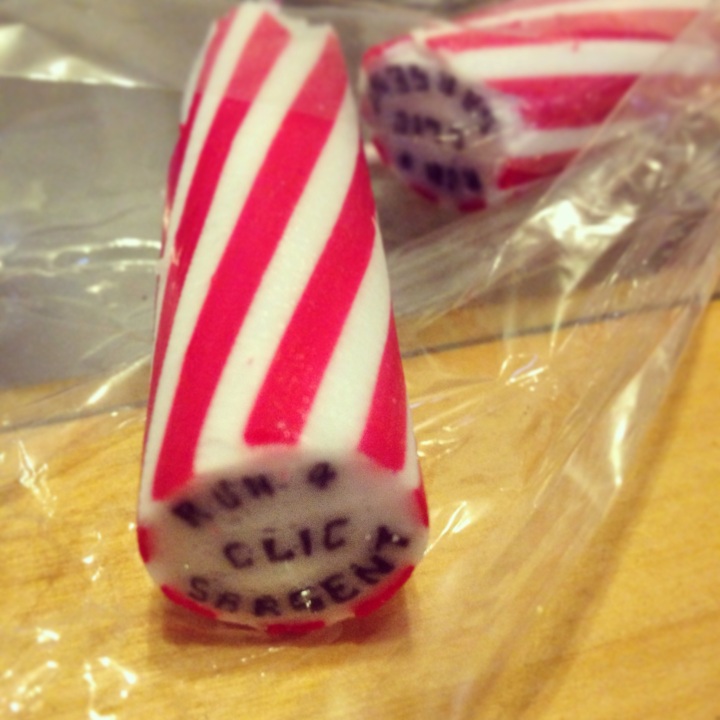 The thing is, despite the reasons for doing Edinburgh the first time round I now run long distances for me. I run them because I love them, because they give me freedom, because they give me the headspace that is so rare in this 24-hour constantly-connected age. That’s what they mean to me. That’s what I mean when I say it’s not that much of a challenge; not that it’s not difficult, but that there’s no hardship involved for me. By the same token, there are some for whom the challenge of finishing a 5k is the equivalent of climbing Everest. My finishing a marathon today doesn’t deserve anywhere near as much recognition as that.

Of course charities don’t see it that way, and likely as not neither do my friends – they’re a pretty generous bunch – so I realise this is basically my capacity for overanalysis exceeding itself once again. I could suck it up and do it for a charity anyway, put that extra bit of hard work into the fundraising effort and make a crucial few hundred quid for someone who needs it, because at the end of the day it’s not about me. Following that logic, I probably don’t deserve a ballot place anyway. London is all about community and inclusivity and bringing the sport to more and more people each year, which is precisely why the applications outweigh the available places by larger and larger margins each year. Soon enough, even the charity route will become a lottery in itself, so oversubscribed the event has become. This is a brilliant thing. There SHOULD be thousands of people clamouring to raise £2k each for charities who rely on the spare change in our pockets. There are plenty of other marathons out there that don’t require runners to fundraise. And anyway, aren’t I always going on about big city marathons not really being my thing?

I just can’t let London go though. However selfish or facile my reasons for wanting to do it, the only person I need to justify them to is me.

So, I’ve decided not to enter via a charity again this year; I can’t run with a fridge on my back and I’m not sociable enough to organise coffee mornings or raffles. Those places really should go to those who will make the best use of them. I will however do the one thing I can do, which is offer my services as a marshal or bag handler. If one day I am lucky enough to get through the ballot, well, I’ll run my bloody heart out. But for now I’ve got five other marathons lined up to prepare for. I’m pretty lucky even to be able to say that.